Merrion Row, which was lauded as part of the gastronomic golden mile back in the Celtic Tiger years, was soon plunged into a walk of shame after many of the iconic symbols of excess imploded into a bankrupt pile in the recession. With the in-crowd heading to the hipper, emerging cool of the South William Street area, things have been a little quieter along this stretch, but it is now home to one of the toughest restaurant bookings in the city. Blink at your peril, and you will miss Etto, a discreet little restaurant which has such a miniscule frontage it is close to invisible.

As we walked into the narrow, sparsely decorated room filled with diners, we worried that there wouldn’t be a table for us. But after a wait at the bar, where we were given a little bowl of smoked almonds to crunch on with our Prosecco, we were shown to a small, wooden table which had just been vacated by fellow critics which included the ebulliant Ross Golden Bannon. Yes, this place is very much on the radar with in-the-know gastronauts.

Italian, but not rigidly tied to mama’s apron strings …

The menu is simple and everything looks interesting. It’s Italian, without sticking rigidly to the handbook and has nice twists which are not a bit obvious. For example, the delicious croquettes from the Bar Menu (€11) are succulent pieces of pork belly and smoked eel inside a crisp deep fried crumb. Our starters were clever too – the mussels came with nduja (€11.50), a spicy Italian sausage which really lifted the dish and a poached duck egg was served in a smoked eel and bacon broth (€11), which was intoxicatingly full of flavour, and the crunch of the crispy bacon which was scattered over it added a lovely textural element. The malfatti (€11), which are roughly formed rounds of gnocchi, had a good earthy flavour from the chanterelles, complemented by the wash of brown butter and crispy sage, and our final starter was vitello tonnato (€11), a classic northern Italian dish of thinly sliced veal with a tuna mayonnaise. 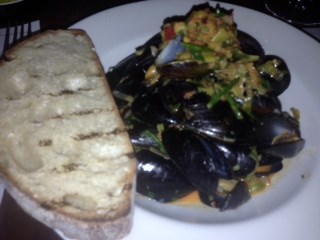 For main courses, the butternut squash anolini (€18) were silky circles of pasta filled with cubes of butternut squash in a light broth topped with cavalo nero and Parmesan; the black sole (€25) was served with sweet-tasting clams, thin slices of celeriac and young broccoli draped with lardo which added a very Italian flavour to the dish; and we also had the sika deer (€26) which was done two ways, both cooked rare and slow cooked and served with champ and beetroot. I should also add that we had a side order of crispy potatoes with rosemary salt and pecorino (€4) which were extremely good. 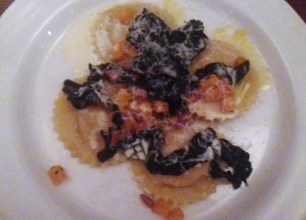 All of the desserts are reasonably priced at €7, and we took our server’s recommendation of red wine prunes (€7) which she said are her absolute favourite, and with good reason. It’s a simple dish, but the deep Christmassy flavours of the soused prunes worked beautifully with the lactic creaminess of the mascarpone which was gently flavoured with vanilla. Our other desserts were an intense chocolate pot served in little cup with a biscuit, a delicate buttermilk blancmange with pears that had been cooked in cinnamon and red wine and topped with toasted almonds; and an exceptionally good barley pudding which was cooked like tapioca, had a quenelle of what I think was butterscotch mousse and was scattered with segments of blood orange and toasted hazelnuts. A dessert for which I think the word “awesome” well and truly applies.

Simple food is not easy to do right…

Everything in Etto is very simple, yet it works. The menu is changed daily and typed on a A5 sheet of white paper. The food is served on simple white plates, the ingredients are top quality and the whole focus is on flavour.  And the relaxed atmosphere and very good service ensures that you really enjoy your dinner. Sound perfect? Well, it pretty much is. London has been spawning modern Italian restaurants like Zucca and Trullo for the past few years, and it is something that has been seriously lacking in Dublin. Young Irish chefs like Robin Gill who opened the highly acclaimed Dairy restaurant in Clapham, Colin Daily in Picture and Andy McFadden in L’Autre Pied, have been making a name for themselves in London. It is great to see some of this talent come home, and Barry Fitzgerald the head chef at Etto, who previously worked at the Michelin starred gastro pub Harwood Arms in Fulham has done exactly that. It is even better to see that when they do, their talent is recognised and the restaurant is booked out.

This is a trend I would love to see continue.